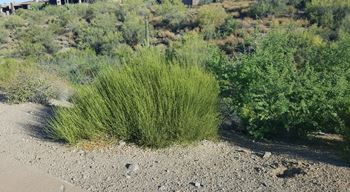 Size: to 6 feet tall but usually half that

Growth Form: Shrub; Leafless and flowerless. The plants are dioecious(with male and female cones on separate plants) At the stem nodes, the male plants produce 1 or more reddish brown, egg-shaped pollen cones, while the female plants produce 1 or more reddish brown, flower-like seed cones with 6 to 9 whorls of circular, papery, translucent bracts in groups of three. The scale-like leaves are in whorls of three at the stem nodes and will become dry, gray, and shredded with age and can fall off. The stems are slender, rigid, jointed, initially glaucous yellow-green in color, and then aging to yellow and then gray. The base of the plant is woody.

Comments: Mormon tea derives its name from the Mormon settlers who collected its stems to brew an herbal tea, Related to Chinese ephedra, from which ephedrine is commercially extracted, our Mormon tea contains low levels of pseudoephedrine, related to ephedrine, (hence the genus Ephedra). Mormon tea produces small cones that the casual observer might mistake for flowers. The plant has tiny, scale-like leaves found where the short stems join.