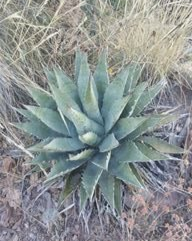 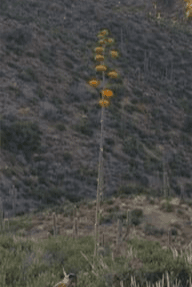 Duration: Perennial
Size: 1 to 3 feet
Growth Form: Succulent, rosette of thick fleshy gray to light green leaves. These 1 ft., spine-tipped leaves eventually subtend a tall flowering stalk supporting a cluster of yellow flowers at its tip. After the plant flowers, it dies.
Leaves: The leaves are in a basal rosette and are stiff, gray to light green, linear, and taper to a pointed tip. The leaves have a stout, sharp spine at the tip and sharp spines along the leaf margins. Like all agave plants, this plant is, for several years, a rosette of stiff, succulent, sword-like leaves.

Comments: Agaves are often called century plants and require many years to flower, but not a century. They provided southwestern Native American with food, beverages, fiber, soap, medicine, and lances. In Desert Mountain, this species does better with a little shade at the lower elevations. We often see Agave parryi var. truncata (artichoke agave) being planted. They have a broader leaf than the ssp. Parryi, and they are found natively only along the Durango-Zacatecas border in Mexico.